Use the quick summary below to compare the most common chip types:

5050 LED chips are often used on 60 LED-per-metre strip lights, pulling 14.4 watts at 24 volts (commonly called 14.4w p/m or 15w p/m LED tape). With an output of around 990-1080 lumens per metre, depending on colour, this tape gives you a smooth, bright effect when shining onto a surface. These 60 SMD p/m 5050 LED strip lights are typically used for general lighting applications, such as corridor lighting, replacing fluorescent tube lighting, in homes, bars, restaurants, hotels and other locations.

Branded Epistar SMDs are the highest quality 5050 LEDs on the market. They provide the best brightness, colour consistency and reliability with 70% output at 50,000 hours. Using cheaper alternatives instead, you’ll get dimmer and more unreliable LEDs that output inconsistent colours within each reel and also from reel to reel. All our 5050 chips use Epistar SMDs. We also offer splashproof IP65 and waterproof IP67 heatshrink-coated options.

Our LED strip lights are mounted on 2-ounce PCBs (10mm width) for better heat dispersion, superior reliability and longer life. So this really is a product for the future. 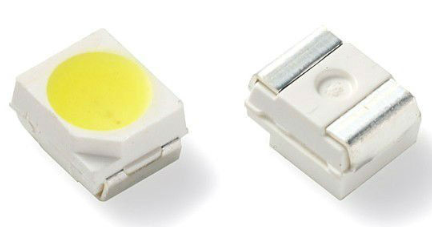 3528 60 SMD p/m LED strip lights are typically used for feature lighting – such as plinth or coving lights, in homes, bars, restaurants, hotels and other locations.

Though less common than standard 60 SMDs p/m LED tape, 3528 SMDs are also used on LED strip lights with 120 chips per metre. Pulling 9.6 watts (known as 9.6w p/m or 10w p/m LED tape), these tapes are available in the same range of colours. Light output is exactly double that of 60 SMDs p/m tape – they have twice as many LEDs – so that’s around 660-720 lumens per metre, depending on colour.

3528 120 SMD p/m LED strips are used for the same kind of feature-lighting applications as its standard alternative. We recommend them for locations with strong ambient light, where more brightness is needed than the 4.8w p/m can produce.

3528 SMDs do not give off a lot of heat – you can safely touch them. Even so, the 60 LED p/m tape requires PCBs (printed circuit boards) at least 8mm wide, and the 120 LED p/m tape should use 2-ounce thickness PCBs. As long as your LED strips meet these minimum specifications, they can be simply installed anywhere because they have a sufficient heat sink not to require an additional aluminium extrusion.

There are many manufacturers of 3528 SMDs. Epistar-branded SMDs are extremely high quality and give you the brightest 3528 SMDs on the market. They offer excellent colour consistency and reliability, with a life of 50,000 hours at 70% output. Cheaper alternatives are less bright and less reliable, and are prone to colour inconsistencies within the reel and between reels.